Since I've been on a train kick lately after finishing my On30 train for gaming use, I decided to fix some of the old HO scale trains I've bought over the past few years. This is a Bachmann GE 44-ton Switcher I bought off Ebay 2 years ago that was advertised (with pics!) as the unlettered yellow version.....but the only thing I received was a box for the unlettered yellow version, with this lettered black Pennsylvania switcher inside! Since it was cheap and I got a partial refund, I decided to remove the lettering and repaint it for my Wisconsin-centered layout.

First, I disassembled the entire model, cleaned it, removed the Pennsy roadname and some of the numbering with white spirit, and removed any mold lines. I then repainted the grabirons, railings, and lower chassis to match the existing numbering and safety lines using a 75/25 mix of Tamiya Lemon Yellow and Flat Yellow. I then repainted the engineer figure with Vallejo, and painted the cab interior Vallejo Golden Olive. Chipping and window frames were painted in AK Gunmetal (love this color btw).
Once the acrylics were thoroughly cured, I ran into a problem - the painted interior was too small for the plastic windows! Installation would be tedious and potentially damaging to the paint, so I opted to reglaze the windows using Testors Canopy maker. While it took days to dry, the end result looks a little more realistic than a plastic window insert.
I weathered it using a mix of enamel washes and oils. The exhaust stains are mostly dry blended oils, as are the rust patches. Any streaking effects are AK enamel washes.
While this was a tedious rebuild, the end result is better than I expected and I had so much fun weathering it, I grabbed a few train car kits, weathered those too, and I'll be releasing more pics this week. 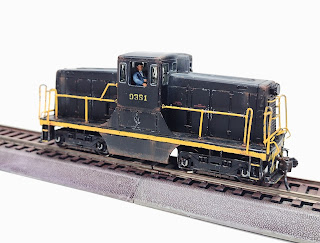 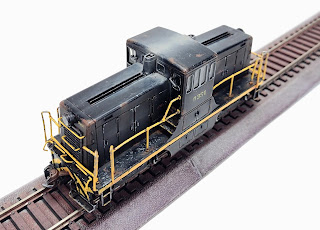 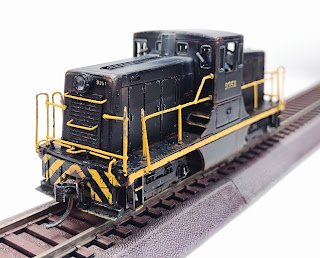 Star Wars Legion Darth Vader
(Note - I did notice and fix the improperly shaded red highlight on his codpiece after I took these pics!)
Really enjoyed working on this figure though, due to his consistently dark tones, it was technically challenging. Like the Deathtroopers, this was another figure I did using glazes, working my way up from a medium tone grey into straight black. His armor plates are done in Turbodork's Black Ice and the 'leather' portions of his suit are coated in Tamiya Clear to give them a semi-gloss finish. Armor details are done in Vallejo Gunship Gray, Vallejo Oily Steel, Tamiya Park Green, and AK Gunmetal.
The lightsaber was very tricky. A lot of painters so the highlights in a pinkish white, but I really wanted mine to have a more fiery tone, so I opted to highlight from yellow into red.
The red OSL is mostly Vallejo Red and Tamiya Red, heavily thinned to glazes and then I toned the transitions down by applying a wash of Secret Weapon Red Black (a wash I've grown to love and I'm unsure what I'll do when it runs out) 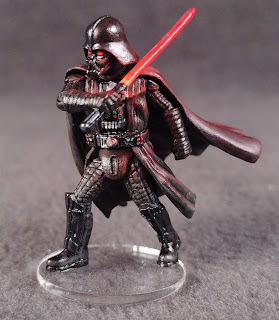 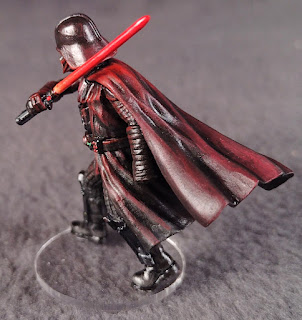 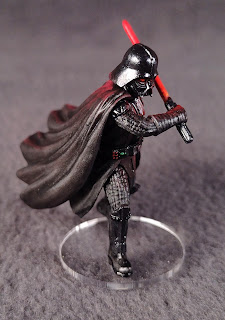 Star Wars Deathtrooper Squad
More Legion figures, more new painting techniques. This time I wanted to try a new approach to painting black by applying multiple washes of black and purple. While purple may seem like an odd choice, because the DTs are so dark overall, I wanted a color that would make their body gloves and pauldrons stand out whole still being "black" from a distance.
I started with grey primer and added multiple washes of Secret Weapon soft body black and GW purple wash (about 12 in total). Instead of dark green lenses on the helmets, I did dark red. Their gloss black armor is painted using Turbodork Black Ice. To achieve the scorched metal effect on the gunbarrels, I used several thin layers of Turbodork's aptly named Laserburn with a final application of AK Astral berrylium. 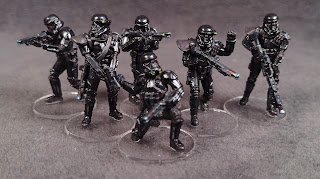 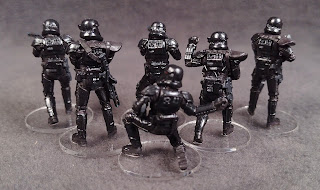 Cassian Andor and K2-S0 from Star Wars: Rogue One
Both of these figures are experiments in new techniques. For K2, I used a metallic primer and then airbrushed his Tamiya navy blue basecoat over it - without chipping fluid. Due to the gloss nature of the primer, the basecoat can be chipped with a toothpick for a worn metal look.  To set the finish, I airbrushed Tamiya clear over it, which also gives his armor a semigloss finish. Details are picked out using Vallejo and AK acrylics.
Cassian is zenithal primed and then painted using filters (basically watered down acrylics), which is a quick and easy way to achieve the first level of highlights and shadows. I learned this technique from the modeler Nightshift on Youtube. I really tried to mimic Diego Luna's skin tones and hair color accurately. 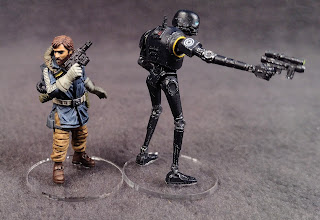 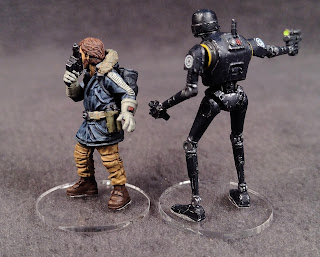 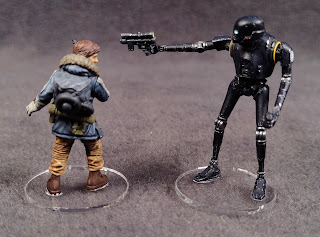 (EDIT: I noticed the tide marks on the tires and above the windshield as I was editing these photos. They've since been cleaned up.)
Tamiya 1/48 Citroen 11CV in Luftwaffe service, Berlin
Well, this was my first ever Tamiya kit and I'm legitimately blown away by how easy it was to assemble and how nicely it looks finished - so much so I picked up the 1/48 Kubelwagen last week!
This build is straight out of the box, with the exception of the license decals. As its scaled perfectly with 28mm figures, I wanted this to represent a vehicle for my Battle of Berlin army and needed the 300 series. The car is painted overall in Tamiya Field Blue - with a few drops of Tamiya Neutral Grey to tone the blue down - with detailed painting done with Vallejo acrylics. Unfortunately, you can't see the interior in the photos, but that is well detailed, fully painted to represent brown leather seating, and weathered.
As this is a staff car, weathering was lighter than what I normally do, mostly consisting of oil pin washes, some acrylic dried mud spatter (Secret Weapon Caked Dirt is perfect for this effect), and AK enamels to represent petrol spills and the rusty muffler.
Definitely my most enjoyable build of 2021 so far. 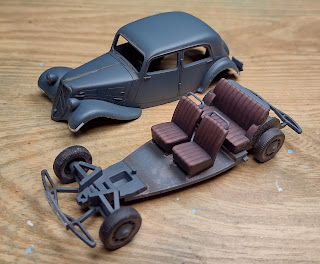 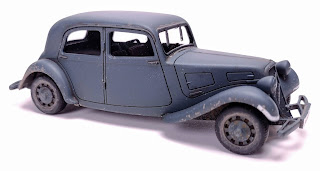 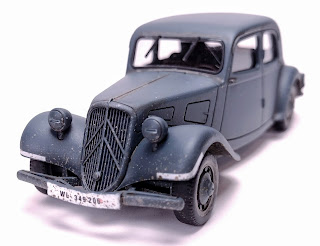 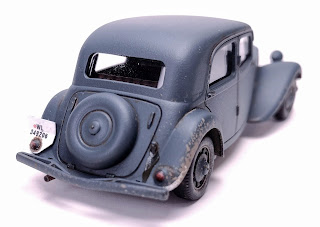 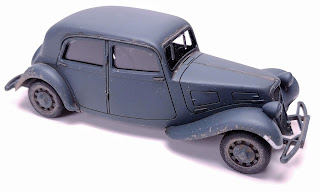 SOCIAL MEDIA AND OTHER SITES