Well, the weather lately is conspiring against my desire to seal and complete some minis, so I thought I'd post a tutorial on how I make simple camo netting for my 15mm minis. Note, to all you button counters, that this is meant to reflect the "rope-style" camouflage nets in use during WWII and not the post-war/modern style of netting with colored strips woven in. Here's the effect we're trying to achieve: 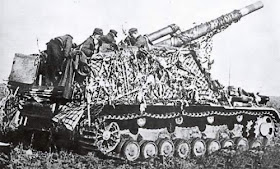 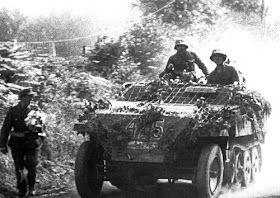 Step 1: Cut a large section of gauze from the roll and let it sit in your dye medium for at least a day. Diluted ink washes work well but the color can be much too intense. Instead, I recommend using a natural brownish dye like used tea bags. The gauze pictured below was dyed in such a way and, while it takes longer to dye the gauze, the effect is much more subtle and varied. Step 2: Cut a squarish piece of gauze off the dyed section. Don't go too large - there were very few camo nets made that could cover the entire vehicle and, even if they were, such nets were impractical for a fighting vehicle. 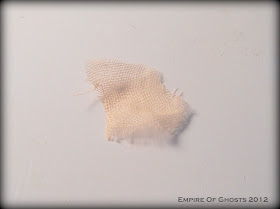 You'll notice in the picture above that the edges are slightly frayed and there are spots of net missing - this is intentional. You can remove the outer rows from the gauze after cutting for a frayed edge appearance. Holes and missing spots can be removed with an X-acto blade. I recommend doing this BEFORE placing the net on your mini, so as not to damage it.

Step 3: Dip the entire gauze piece in the glue mix and remove it. Before placing it on the miniature, make sure to wipe off any excess glue. The piece should be damp, not soaking wet.

Step 4: Place the piece where you want the netting to be. It's more realistic to drape the netting over the side of a vehicle or over certain high protrusions, rather than plopping it directly centered. 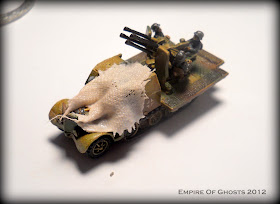 Step 5: Now, using your toothpick/handle/fingers, gently push the netting over the contours of the vehicle. Remember to "drape" the net over extreme protrusions and dips in the mini. Let the net dry.

Folded nets - Step 1: Cut an exact square piece of gauze. Fray the edges as desired. It's best not to put holes in this, or you'll have trouble folding it. 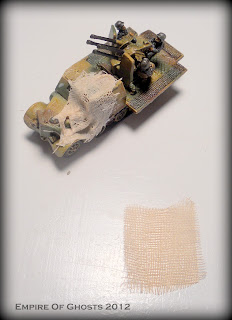 Folded nets - Step 2: Dip the square in the glue. Remove any excess glue and place upon a flat surface. Fold the square in half, then fold in half again (so it's 1/4 its original size). Place the folded net on the mini. 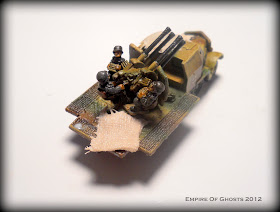 Folded nets - Step 3: Drape the net appropriately. You may fold back certain parts as desired. Allow net to dry. 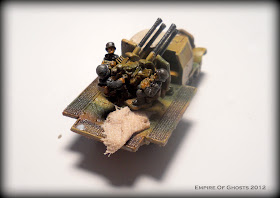 Rolled Nets - Step 1: Cut a rectangular piece of gauze. Don't make it too long. Fray the edges and make holes, as desired.

Rolled Nets - Step 2: Dip the gauze in the glue, remove any excess glue, and place on a level surface. Beginning at one end, roll the net upon itself.

You may also roll the net between your thumb and fingers for a hastily rolled look. 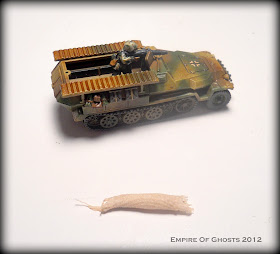 Rolled nets - Step 3: Place the rolled net upon the mini and drape as necessary. Allow the net to dry. 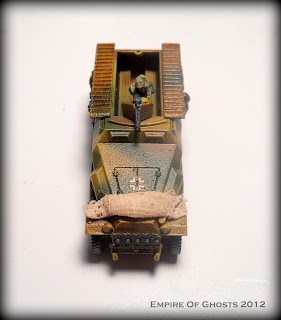 Barrel Shrouds - Step 1: Cut a long rectangular piece of gauze about 2x the diameter of the barrel it will cover. Fray the edges and make holes as desired.

Note: In reality, only long protruding gun barrels received camo netting regularly, since they were the most noticeable feature on the battlefield. It was rare for shorter barrels to be shrouded since A) they did not really "stick out" on the battlefield and B) it was impractical to swing the gun with a large net draped over a small barrel. 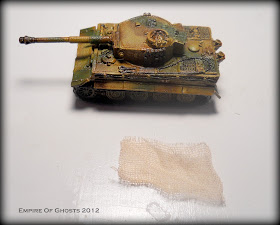 Barrel shrouds - Step 2: Dip the piece of gauze in the glue and remove any excess glue. Place the net on the barrel, with one side further off than the other (see pic below). 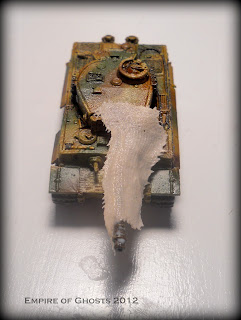 Barrel shrouds - Step 3: Using the longer end, "wrap" the net loosely around the barrel. This is tricky and it may take a couple of tries to get "just right".

In the end, it should look like the net is hanging from the barrel - the top should be flush with the barrel's contours, while the bottom drapes down loosely. See the pic below. 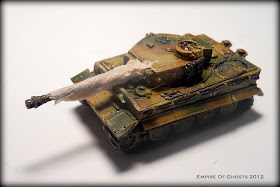 Final Step: When the netting is dry, dip clump foliage in the glue, remove excess glue, and then place upon the netting. Add as little or as much as you desired. You may also add clumps of static grass or flocking or even small-scale plastic "branches".

Once placed, DO NOT TOUCH the foliage and allow to dry thoroughly. 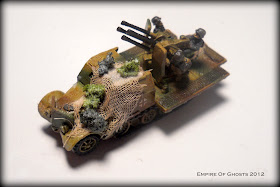 You can see some completed minis I've done which use camo nets here and here.